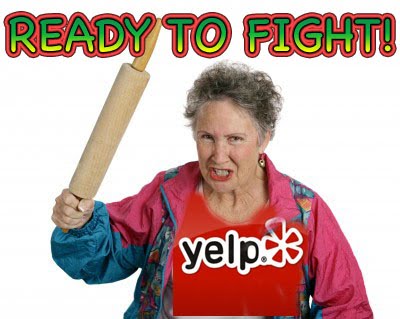 Yelp was initially a great idea -- and they're doing the type of thing I really support. They are essentially a review site for local businesses. All of the material is user-posted -- kinda like TripAdvisor, except Yelp is aimed at local businesses and not travel.

However, unlike TripAdvisor, Yelp has an annoying and poorly implemented feature -- the filter.

Here is Yelp's lame (but reasonable-sounding) explanation of their filter:

Basically, the filter is in place to keep out bogus reviews -- whether good or bad. I completely support such an effort, as I find it highly annoying when I'm reading mixed reviews and wondering which ones are real and which were posted by shills. After all, the business owner and his friends are likely to post bogus good reviews, and the owners of competing businesses are likely to post highly biased bad ones.

Unfortunately, the Yelp filter has run amok and basically turned the reviewing system into a congregation of elitists. Unless you spend a good deal of time contributing to Yelp, your reviews are likely to be quickly filtered and never seen again.

Simply put, the filter is WAY too sensitive, and flags a large percentage of legitimate reviews as fake. This is an automated process, so it's not being done by any human being. Also, the filter frequently operates in an all-or-nothing fashion, meaning that once a single review is filtered, all of your other reviews are, as well.

I unsuccesfully tried to search the web to find ways to beat the filter. It seemed that nobody had any realistic ideas as to how one could get around it, or if they did, they weren't interested in sharing them with the public.

Being a former '80s-era hacker, as well as a guy who likes a good intellectual/technical/psychological challenge, I decided to make my own attempts to learn the ways of the filter. Once I knew how it worked, and what criteria it used, I could easily devise a way to beat it.

When I eventually solved the puzzle, I came to a surprising conclusion: You can beat the Yelp filter simply by treating the site the same way as a woman you're trying to romance. Sounds ridiculous? Of course, but read on...

#1: Give a Lot of Details About Yourself

If you're on a first date, and a woman asks you questions about your life, she's not likely to see you again if you clam up and refuse to tell her anything. If you brush off her questions and try to take things to the "next step" too soon, she will sense that and shut you out. Similarly, Yelp wants to know that you're serious about being part of their community, and aren't just quickly creating an account in order to use them for what you want.

How to accomplish this: Yelp has a "profile" that it asks you to complete when you sign up. You can skip it, but that's suicide to your ability to keep your reviews unfiltered. Make sure to fill out the entire basic profile, even if you stuff it full of lies. Furthermore, make sure to post a picture! It doesn't have to be your picture. You can grab one off google, or perhaps of your least-favorite Facebook friend, but just make sure you have a picture of a human being on the profile.

If you're fortunate enough to get a woman to put out on the first date, but then don't bother calling her for the next month, what do you think will happen? Except in the cases where she has an incredibly low self-esteem, she will realize that she was used, and will refuse to see you again when you show up for the next attempted booty call. Yelp is the same way. It really, really, really hates people that show up, drop a few reviews, and don't log in again for a long time (or ever). Yelp wants to feel like you're not just using them to get the positive or negative word out about a local business, but that you actually care about it and the community it has created. If you simply post a review and leave your account lying dormant, all of your reviews will be filtered within a few weeks.

How to accomplish this: Log in every so often (maybe once per week) and do something meaningful. Post another review, even if it's short and rather frivolous. Send a friend request (more on that later). Compliment other reviewers, or tag their posts as useful/cool/funny. Just show Yelp that you don't just see it as a worthless object that satisfies only one need.

#3: Put Your Best Foot Forward at the Beginning

In the early stages of dating, you need to let all of your good qualities shine, while doing your best to hide your faults. This is the #1 rule of marketing, and it applies to marketing yourself, as well. If you don't bother trying to be charming, interesting, funny, and caring, there's a good chance that you're not going to get anywhere. In Yelp's case, posting informative, high-quality reviews is a great way to get the filter to leave you alone. If you show up and write a 3-line review basically saying nothing, you won't get anyone tagging your review in a complimentary fashion, and the filter will also notice that your review was short and not very useful. If you fail to post any good reviews at the beginning, you will find all of them filtered within a relatively short time.

How to accomplish this: In your first few reviews, make them relatively lengthy, and packed with good information. If it's a bad review, tell everyone exactly why the place sucked, and give some humorous anecdotes to back it up and entertain the reader. If it's a good review, throw in some useful tips, such as the best dishes to order, how to find the cheapest parking in the area, or how to get that elusive 2-for-1 coupon online. When you write a good review, users will tag it as "Funny", "Useful", or "Cool", and just a few of those complimentary tags from established users will be enough to give your new account a lot of anti-filter credibility. Don't worry, you're not going to be married to writing long reviews on Yelp for the rest of your life! After you get "established" with a few good reviews that are tagged positively, you can simply maintain your account by posting short, effortless reviews every so often, and engaging in other quick activity on the site.

#4: Become Close With Her Friends

If a woman really likes you, another potential killer to a budding relationship can be her friends. If they don't like you, there's a good chance that they'll talk her out of continuing with you. On the flip side, if they love you, she will be a lot more likely to want to stick around, feeling the validation from those whom she respects. Yelp is very similar. It is an online community, and you are seen as legitimate if the community likes you. In addition to receiving funny/cool/useful tags on your posts, it's also important to make friends on Yelp. Like Facebook, these don't have to be real friends, but they have to be listed as such.

How to accomplish this: Regular Yelp posters are very egocentric. They have an extreme need to be acknowledged and approved. After all, they're not gaining financially by posting reviews. They review things because they want to feel like people respect their opinions, and that they actually have some influence in this world. You can use this fact to your advantage when accumulating Yelp "friends". Simply read some local reviews, look for regular users (ones that have posted a lot of reviews), and drop them complimentary messages that you have also been to the business and completely agree with what they wrote. Don't worry if it's all BS -- they will feel really good to receive your message, and when you get back a positive response, send them a friend request. 9 times out of 10, they will instantly accept you. Do this a few times, and you'll have a few friends on Yelp, which is really all you need to give you points with the filter.

#5: Tone Down Your Extreme Opinions at the Beginning

When on your first few dates, it's good to avoid being either too positive or too negative. A guy who is too positive will be seen as either a chump or a phony, and a guy who is too negative will appear to be a downer and no fun. It's best to keep yourself at a happy medium for awhile, until the girl gets to know the real you. At that point, if you express strong feelings of positivity or negativity about certain things, she'll understand those are more of the exception, and not the rule. Yelp should be treated the same way. If your only reviews are 1-star (the lowest possible), the filter will assume that you're a local competitor looking to trash the competition. If your only reviews are 5-stars (the highest possible), the filter will assume that you're a shill.

How to accomplish this: Keep your first few reviews in the 2-to-4 star range. After you gain some credibility with the system using the other techniques above, feel free to throw your 1 and 5 star reviews into the mix.

Women get really angry when it appears you're all about your own concerns, and don't particularly care about what's going on with their lives. Yelp is the same way. If it believes you're reading other reviews and reacting to them, it's less likely to filter what you post.

How to accomplish this: At the bottom of every review, you can tag it as Useful, Funny, or Cool. Be generous with these tags, as it indicates to Yelp that you're reading and contributing your opinion regarding existing reviews. The filter will go easier on you if it appears that you care enough to rate what others have written.

So there you go... 6 tried and proven techniques to legitimize your Yelp account and keep your reviews unfiltered. Once you get your account well established on the system (which shouldn't take too long, using the above techniques), you can ease up and keep your account in good standing by simply logging in every so often and engaging in minimal activity. Once you've been on a long time, even that won't be necessary anymore.

This sounds like a lot of effort, but in reality, none of this takes a very long time, and it gives your voice the power to be heard on the #1 review site in the world.